welcome, slimies gelatins;
.... you have entered my WEB ZONE.

Woof, my aching everything. I had another one of those 'birthdays' yesterday, and it was a totally average day! So, fine by me! I have a pretty long bad-birthday record and I never shut up about it for at least a week.
I also like to do Absolutely Nothing for a week, but I only sorta-kinda did that this year lol.

Me and Deetz had to take our 3 kitties out of the house for the morning while some CHOICE MOLD was cleaned out of the vents. They were... pretty bad! The drywall was even starting to crumble around a couple of them.
The last few times I've had to hire someone to do repairs for something have been GREAT, and its because I've been picking local businesses any time i can. Every time I've had to deal with a company, well, what am I talking about? You already know! You're alive right now!!!! I just like having a blog to rant in!!!!


Anyway uhhhh I have been dealing with a lot of self-reflection the last month, too. Sorta coming to terms with what is most probably going to be late-diagnonsed ASD- one of my close relatives also got diagnosed real recently, and, well, it's been super duper stressful slowly picking through my childhood and even recent memories with this new perspective. My brain was racing over it for like a week solid, and I've just been ....... thinking about it alot, despite trying not to. I've spent most nights trying to focus on the present day rather than being resentful about how it was overlooked for so long, when now it seems so obvious that I was an adorable little autistic motherfucker.
So...... just a huge deal for my brain to re-process it I guess. I'm working a good amount, but I keep falling down rabbit-holes when I remember 'That One Time When' and unlocking a new achievement in my brain: 'Oh, Now I Know Why Im Like This'. My social meter was already pretty pathetic, but lately I wake up at like 15% ready for the day. U_U;

But that being said, I had a very cute time with everyone on the discord server VC the other night! I abandoned the chat to eat some leftover chicken for like 20 minutes so uh sorry about that. (Not really though, it was delicious).
I'm a little behind because of ALL THE THINGS I wrote about, but I'm close to having the MONTHLY PATRON ART done! I should have it set in a day or so. But then its RIGHT BACK TO COMMISSIONS because I never like to keep anyone waiting too long! T_T;; (And golly, I sure have been doing that alot lately...)

I keep losing time to CODING because holy shit I forgot how long it takes to do things. Like.. make a website. haha...
I MISSED MAKING WEBSITES AND LOOKING AT OTHER PEOPLES WEBSITES SO MUCH!!!!!!! AAAAAH!!!!
I was always too intimidated in highschool once I got into the more serious computer programming classes, being such uh.. it was always a bit of a boys club, you could say? (Also it was like 2008 and being sexually harrassed was still the punch-line to most jokes)

I haven't really touched it since then,(mostly because art took over my life lmao) but its been super helpful to keep my mind off of things when I need to relax. I usually spend all that time drawing/working, but ... I'm just so fucking tired rn x_x; I JUST WANNA MAKE WEBSITES!!!!!!!!!!

Anyway keep ur EYES PEELED bc all that coding is still going to good use! I'm currently working on like 200 things because I have a PROBLEM, but one of them is to make this site more mobile-friendly.
I'll be updating hopefully very soon!!!

Heys Babez and Babettez, its ya babe Cavi here laying a sick Update on you. The update is NOT MUCH tbh! Which is a relief. I'm tired of things going on. Make things slow the fuck down!!! Please!!!! U_U;

I'm slowly working on updating this site, but I've had lots of things come up in the last month that take up all of my time. I'm in a pretty good spot mentally for the first time in a while, so stuff hasn't seemed so bad. Aside from being reclusive and crabby, I'm ... fine? I think? I have something 'come up' just about every time I try to work on being less of a hermit, but at the very least, commissions on the reg. have helped keep my, er, 'social stamina' more steady.

Where was I? .. oh, the webiste. Updates. Yeah- I'm trying to beef up the Patreon/Discord since I'm able to dedicate time to it again! I have no big comic in the works right now, so I just want to find out what projects I should put my energy into. I have a few projects that I'll talk about at length pretty soon, so look forward to THAT??(optional, you dont have to look forward to that if you dont want to)

Until then, I'm finishing up a little Valentimes Comic- 3 pages of Joy-Stick content that'll be up for everyone this month! I'll (hopefully) have a section up on the site for comics by then. I'm way more enthusiastic about updating my stuff when it's my website. None of that algorith bullshit. This is the CAVI website for CAVI THINGS. Scroll and just get MORE OF MY SHIT. ITS JUST ME, BABEZ!!!!!!!! ^_~ ~!

I took some extra time to polish the sludge out of my brain and finished my website!!! weeeeooo!!! I wanted to keep all of my stuff in one place, so IT'S HERE! THATS WHAT THIS IS! I'll be working on updating the image gallery when I can, as well as the Artwork + Comic Galleries.
...and... if you have any weird issues with the site, I probably fucked it up and forgot about it. I'll figure it out eventually. 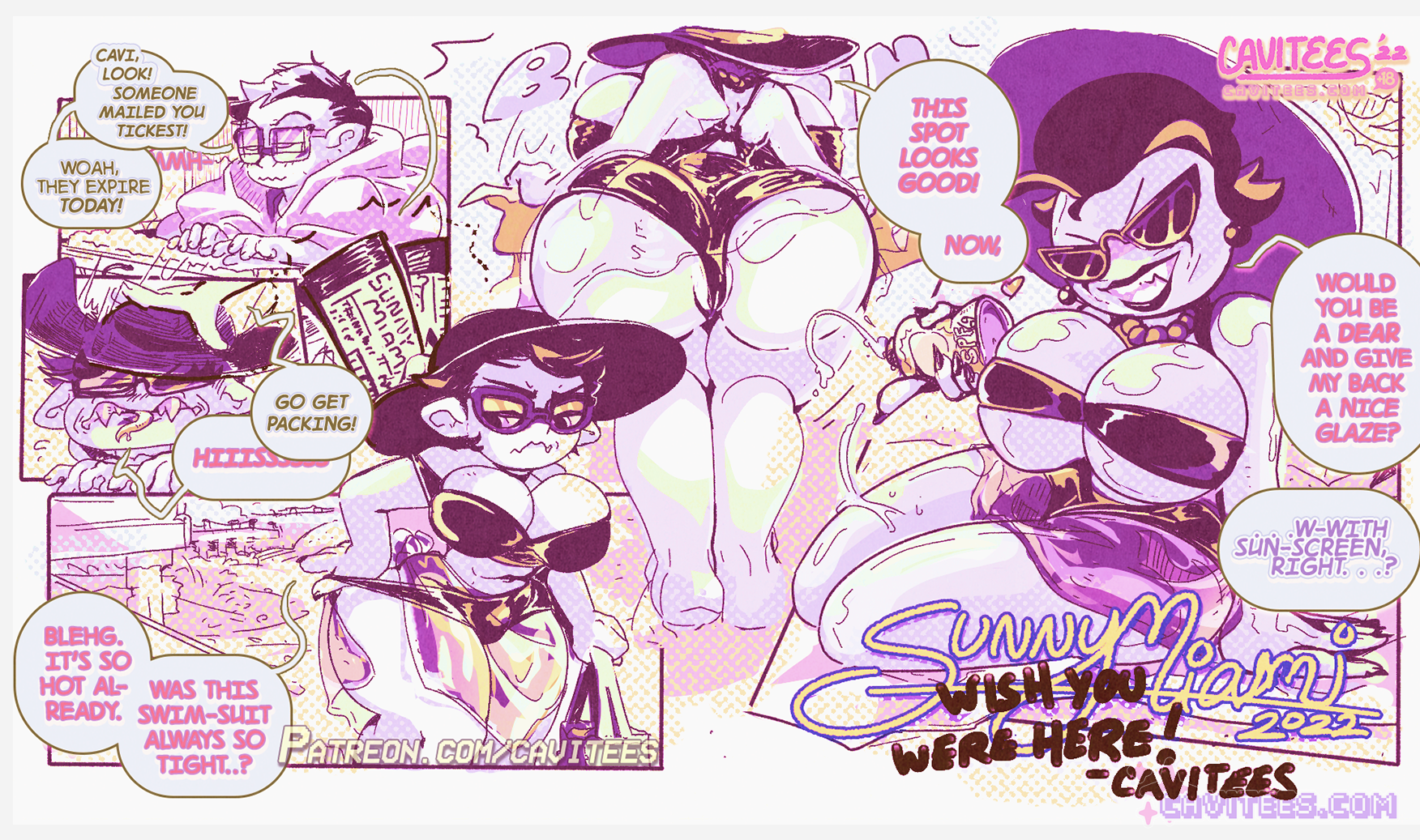 Ahk! This was obviously a little late due to BIRTHDAY SHENANIGANS!!! Not to worry, though- I was just ..... tanning my new age lines at 'Sunny Miami'.

Not the REAL Miami, mind you!
I don't think you can find a Mommification Knick-Knack shoreline on that coast; but if you asked where that mysterious plane ticket sent me?
I have no clue. ...Guess I'll just stay a beach bum for the rest of March~! 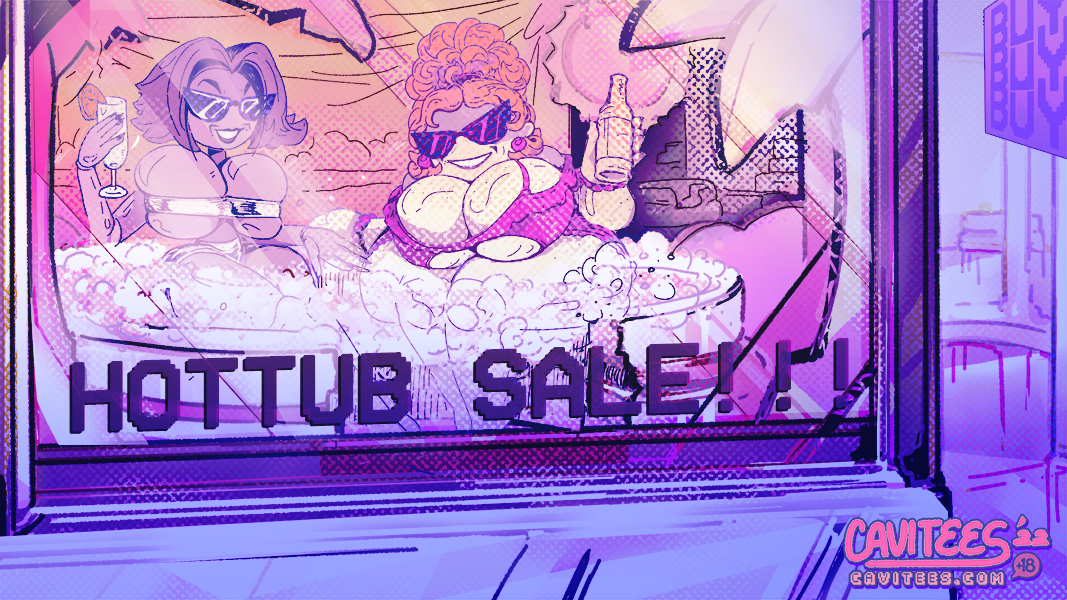 Why buy when you can try?

After a long day of work, there's nothing like a relaxing dip in a jet-powered jacuzzi. And as long as you're willing to break into the Hot-Tub Emporium, that dream can be YOURS!

...Olivia always wondered why Amber preferred the closing shifts- and now she knows why. And the SUNNY MIAMI model is always running in the store window!